Hit enter to search or ESC to close
KilimanjaroVisa issues

Day 1. My first impressions of Tanzania

We arrived early in the morning at 5:30 at Kilimanjaro Airport. Surprisingly the border officials let me into the country quite quickly without even looking at my printed electronic visa (I had such a long story about my visa to Tanzania. In short: I needed a special clearance or a referral visa to Tanzania as a citizen of Kyrgyzstan. They ignored my previous visa application. I was lucky that they have changed the procedure this year *2019* and I could finally apply for a e-visa). After getting our luggage we went out and were greeted by Mike, our local driver.

Tip: Get your e-visa to Tanzania in advance. It will save you some time at the airport.

It was a sunrise. The sky was overcast. Unfortunately, we could not see the top of Kilimanjaro. However, we could observe the true Tanzanian village life instead: agricultural fields, crowds waiting for buses on every road junction, a lot of police check-up points, small cute huts with colourful facades and ugly brownish gray houses, women and men in traditional red clothes walking along the ways which were surprisingly in good conditions, people carrying huge baskets on their heads,crazy motorcyclists, trucks puffing out huge dark clouds. We were driving relatively slowly at 50 km per hour, but the car was shaking at every small bump. It was quite noisy inside the car, but despite this Stefan and I were already falling asleep. So tired were we after a long-haul flight Berlin-Istanbul-Zanzibar-Kilimanjaro.

After a few hours we finally arrived at Nakara hotel in Marangu. It was an idyllic place with lush greenery around. After checking in and packing out we went to have a breakfast where we met our friends, Hans Martin and Martin. They came to Kilimanjaro one day earlier and could do already some safari at Arusha National Park. However, they meant later that it is not as much interesting as big safari destinations like Tarangire, Ngorongoro, Lake Manyara, and of course Serengeti. The boring breakfast was intervened by our guides who came to pick us up for the village tour.

Tip: Arusha National Park is not worth to visit if you are planning to go on safari in bigger parks.

I was truly surprised how cute and beautiful the village gardens were. We learned how papaya, coffee, avocado and many other things from our supermarkets grow. Every single square centimetre of the ground was covered with grass. We were basically bombarded by the surrounding greenery. 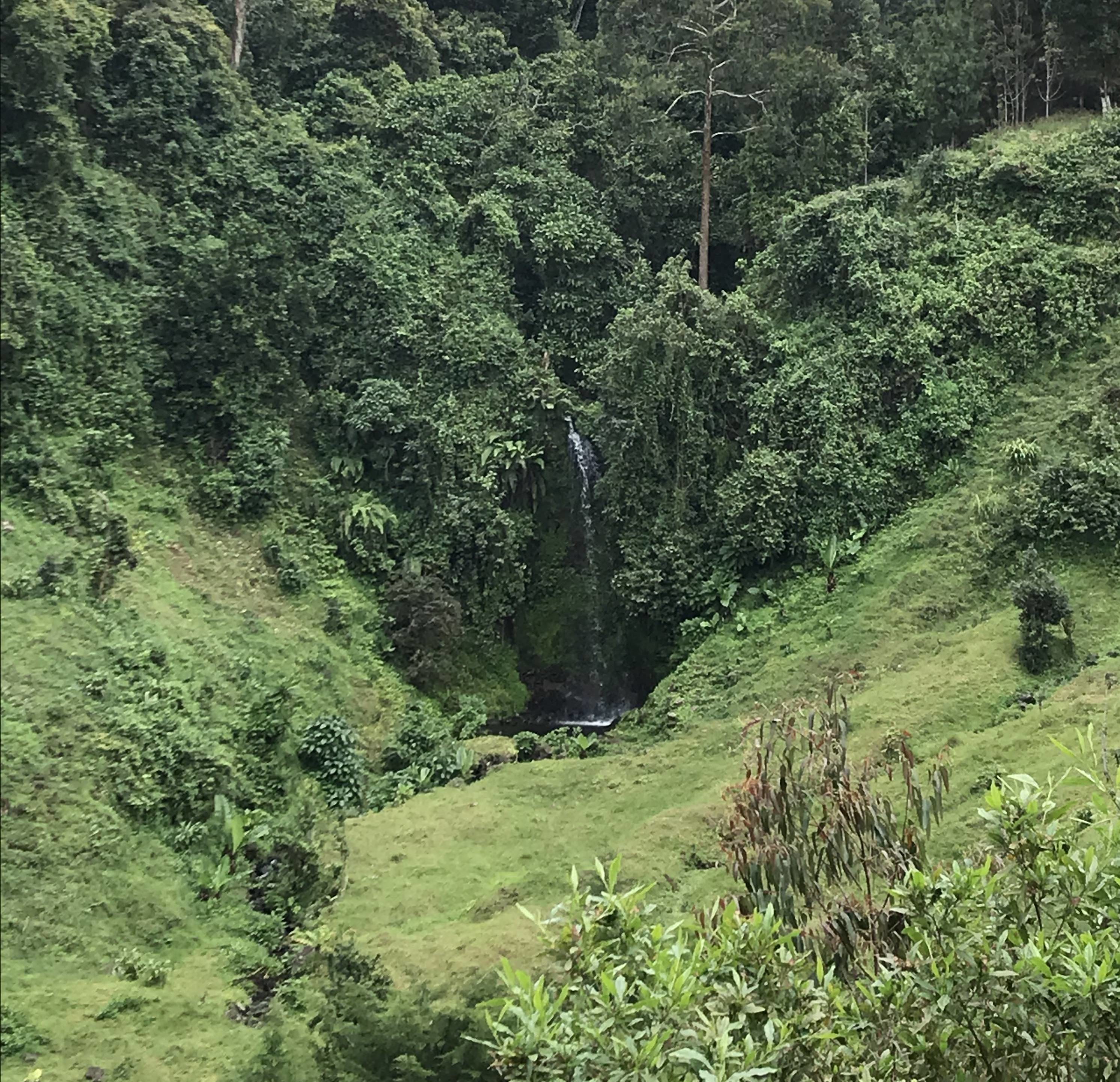 We hiked slowly up and a majestic scenery of the valley down below us as well as of misty hills far away was gradually revealing itself. The scenic path was going directly to a small waterfall leading us later to the entrance of Marangu route. We have stepped now onto territories of the National Park Kilimanjaro.

Here we learnt above the geologic history of Kilimanjaro and other volcanoes around it. We were told about the endemic species of flora and fauna, about the major hiking trails and about mountaineers who first ascended the mountain. Among them was Hans Meyer, a German Explorer. I was especially fascinated by the crazy people who run up to the summit and completed it within a few hours.

We took a must picture in front of the gate and continued our village tour. We went along narrow paths observing cute small plots of land, meeting friendly locals greeting us with “Jambo” and their curious facial expressions. There were no other tourists walking in the village.

We visited another waterfall, but the highlight of our trip was a market. Right there we emerged us into the beating pulse of busy village life, enjoying our stroll between the wooden stands, observing the chaotic movement of locals, breathing in aromas of spices, listening to this loud market life. The tour ended with a lunch at a local restaurant where we were served grilled meat and bananas (that tasted more like potatoes and used commonly here instead of bread), as well as rice with meat. We drove back to the hotel with a taxi. Our tour guides were sitting in the luggage room of the car or were they even standing?

Late afternoon we spent browsing internet and reading until Christian arrived to the hotel. We had a short overview of Kilimanjaro hike by our tour manager, Julius, had a great dinner and went to bed excited about the forecoming adventures. We could not even imagine how exciting and emotional our ascend to Kilimanjaro will be…

Tip:  Take some anti-mosquito sprays with high DEET in order to avoid bites.