Day 5. Walking above the skies.

Today we were allowed to get up an hour later. This was the least stressful morning so far and we had enough time to do morning chores before our hike started. The morning was wonderful: sunny and chill. Unfortunately, the previous night was much colder and my feet were completely frozen when I woke up. Next time I will try to sleep in a wool underwear and not completely naked like I did today. We are not on some tropical island or in a gay sauna, right?

Tip: The night temperatures drastically fell down after the Shira Camp. Take your best sleeping bag and mats comfortable for temperatures at least up to minus 10 C.

After such a cold night I was happy to enjoy warm sun rays tickling my face. Below our camp there was a narrow valley with a fantastic view of two ridges disappearing behind the clouds and forming a giant triangle. The Great Barranco Wall was right in front of us and hundreds of porters were already climbing up. The line of porters and tourists looked like a line of hard-working ants stretching from our camp right into the sky. This wall looks like a beginner level via ferrata in the dolomites with one big difference: the path through barranco wall was not anyhow secured for climbers.

I was shocked how porters were climbing this wall with heavy packs on their backs and heads without securing themselves with ropes or even helmets! They were walking very close to each other. If one fell down, he would drag all others down. Also, this part of the trip was dangerous because of stone falls. So it would be advisable to wear a helmet but no one had one.

Tip: You probably know what I gonna say: put a helmet into a gear list. 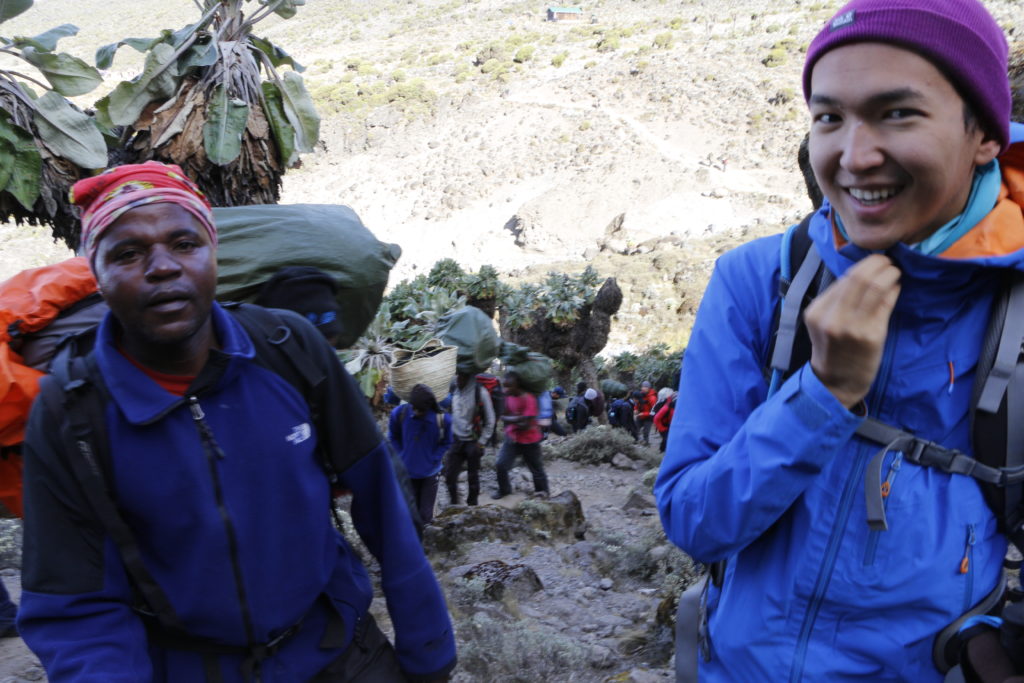 The climb was however beautiful and the horizonth was revealing itself gradually as we went higher up. Suddenly, a magnificent Mout Meru appeared again hovering over the ocean of clouds. The sky itself was showing its respect to this mountain by forming straight lines from the clouds emanating from its summit. These thin stripes of clouds looked like rays of the Mount Meru. It was definitely a jaw-dropping landscape. 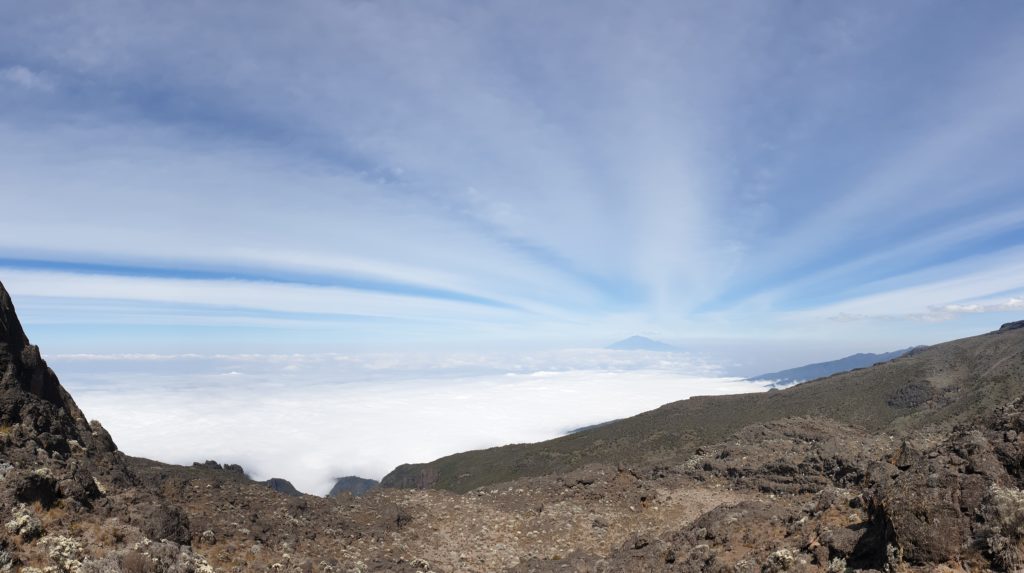 Mount Meru was accompanying us all the way to our next camp, Karanga Camp. Kilimanjaro seemed to be so close now that we were joking that we can skip the next two camps and go straight to the Uhuru Peak. The southern icefields were hanging from the top of Kilimanjaro sparking under the bright sun. Below them endless black lava stones were creating a rough landscape that was disappearing below in the clouds.

Tip: It can get really hot during the day. Also, the sun is scorching. Do not forget the alpine sunglasses, sun cream and light, breathable clothes. Some of us had slight sunburns on the backside of our necks.

We reached soon Karanga camp after a scenic walk between Kilimanjaro and the clouds. Our tents were already there on the nicest spot with the view of Mount Meru and the sky. After having the great lunch we had enough time to relax. We had a wonderful view of clouds from our tents. 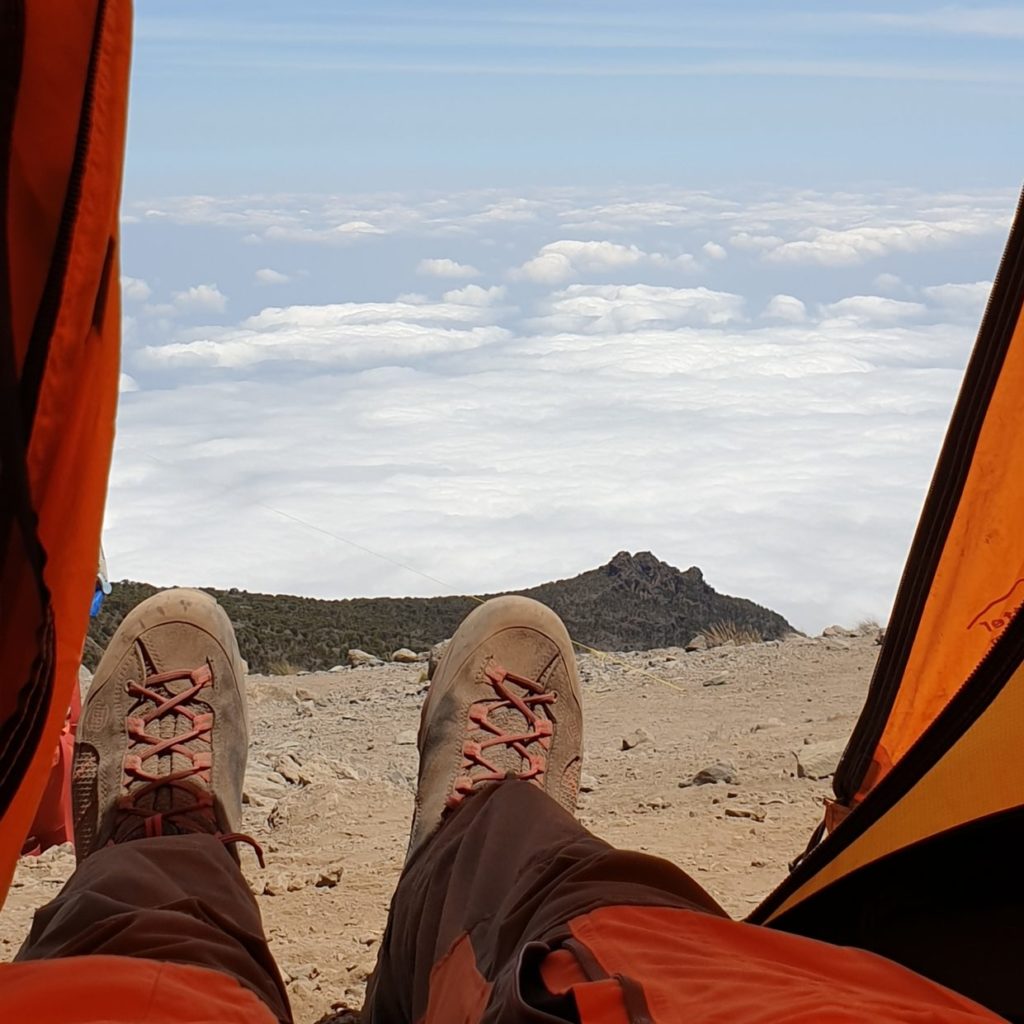 Right before a dinner our Pink Summits team went up to take some pictures in branded t-shirts and with a rainbow flag. Of course we had concerns of others’ reactions. We had to go further up to find safer space and enough time to take pictures. Still, some curious porters followed us but stayed in the distance.

It was another highlight for me to come together as a team, to put on those T-shirts and wave our flags. This was our repetition of waving our rainbow and campaign flags on the highest mountain of Africa. We will wave it again up there, at the Uhuru Peak, the mother of all African mountains.

The day ended with pilaw or plov, a middle eastern dish from Central Asia. It was very symbolic for me as kyrgyz. Moreover, my friend Hans Martin found a kyrgyz coin of 5 soms that probably fell down from his backpack. I took a picture of the coin on the background of Kilimanjaro and felt homesick for a moment. This moment I though immediately of my mom who had certainly worries about me. I should whatsapp her as soon as we descend.

This was a great day and tomorrow we will already start our ascent to Kilimanjaro! Inshallah! I can’t wait!