Hit enter to search or ESC to close
AllgemeinCentral AsiaExpeditions

The Pink Summits team is planning an ascent of Pik Leipzig in Kyrgyzstan in 2022. The mountain has only been climbed twice. In 2014, I was able to reach the summit of the mountain. The following short travelogue is meant to be a little invitation to visit this mountain and the wonderful country with Pink Summits.

After climbing numerous peaks in the Alps and exploring the cultural diversity there, I was looking for some new adventures. At that time, I often thought of mountaineering in Nepal. But I was a student – poor enough that those mountains were out of reach for me. And Nepal was less appealing to me back then. Not because of the landscape itself but because many of my friends had been there at that time. Of course, those mountains must be exceptionally beautiful but I wanted to dive into the unknown. I wanted absolute solitude. I wanted to get off the beaten tracks.

So one day a close friend told me about this faraway country, Kyrgyzstan. To be honest, I had heard little about this country until then. And to be even more honest, I didn’t even know there were mountains there.

While listening to my friend’s stories, I noticed that he was really passionate about the country. So I became curious. Especially about the mountain named Pik Leipzig. That one – he told me – was unclimbed until 1989. In 1989, my friend officially became the first person to climb this mountain. And right after summiting he and his friends named the mountain “Pik Leipzig“ after my hometown in Germany.

So I started researching about this mountain. But I found nothing. Not on the Internet and anywhere else. It was obvious that this mountain had not been climbed again. That mountain seemed to be out of interest for tourists as well as for local climbers. So the mountain has attracted me. Shortly after I decided to travel to Kyrgyzstan and to climb Pik Leipzig – at least to give it a try. 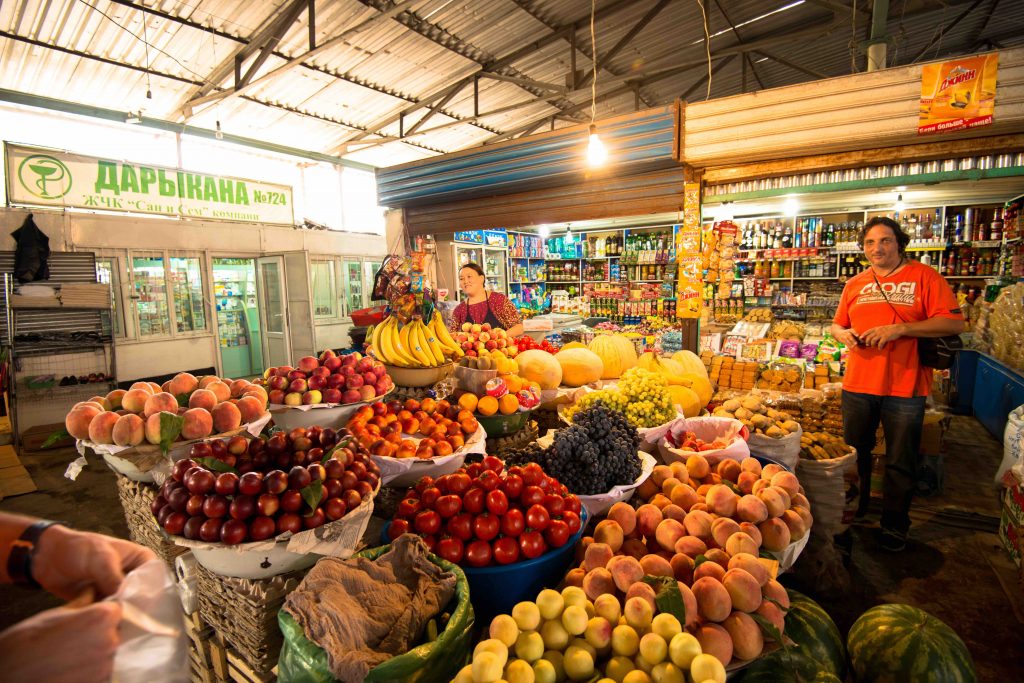 In 2014 we arrived in Osh. I found this city with its bazaar and the hustle and bustle of its streets very pleasant and actually I felt distant from my everyday life in Germany. I know some of my friends are more ambivalent about Osh, however I enjoyed my time there and it was the perfect starting point to get to the mountain. From there, it was a four-hour drive to Achyk-Suu, a small village just before the border to Tajikistan. I wouldn’t say those long car rides are one of my favorite things to do but this trip was exceptionally exciting. The landscape we drove through was impressive: picturesque mountains, several mountain passes, raging rivers along the road and yurts shaped and prevailed the landscape.

I remember well how we arrived in Sary-Tash somewhere in the middle of the magnificent Alay-Valley. The breathtaking view over this small village and the stunning valley across to the huge snow-capped mountains is something I will never forget. Those up-to-7000-meters high peaks seemed unreachable from here. The road divided there into three directions: on the left the road led to the chinese border, straight ahead to the nearby Pamir Highway and to the right to Tajik border. We took the road to the right. From now on, I was fully concentrated on our goal and forgot the worries of my everyday life. The expedition began now. 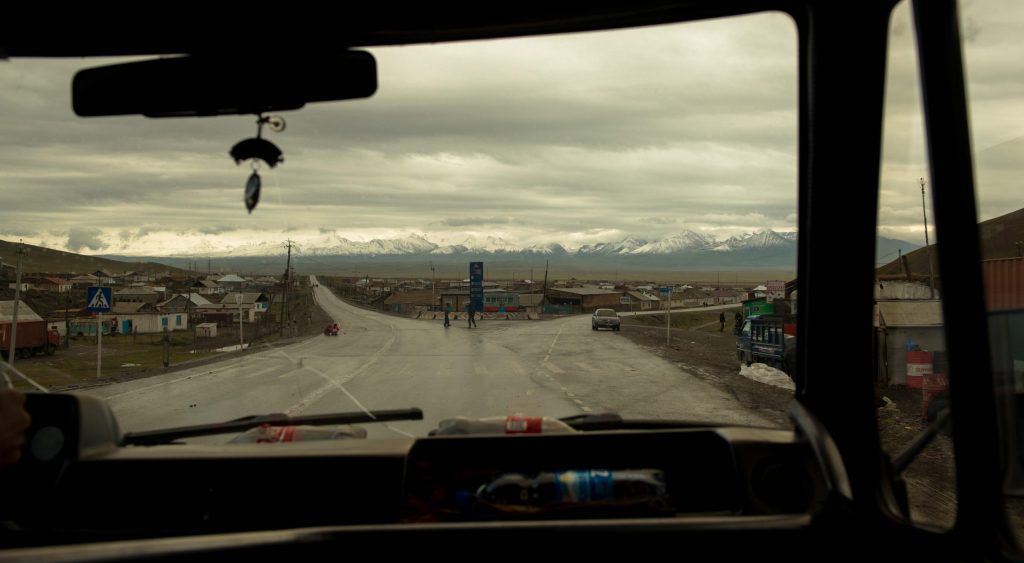 On a mountaineering trip, where a summit is the main destination, everything is a little different than on a trekking tour. You are most of the time on the same mountain. The first thing you do is move to the base of the mountain. There you explore the surroundings and you slowly acclimatize to the altitude. Already at the foot of the mountain, heights of over three thousand meters are often reached. Therefore, at first you spend a few days there and set up a base camp. Then, little by little you ascend higher, move the camp and focus even more on the summit. The Pik Leipzig is 5,725 meters high. This is a fairly moderate altitude, where acclimatization is important, but not as extensive as for mountains over 6,000 meters and above. This makes the trip to Pik Leipzig quite a varied tour, where you are less will bored by long acclimatization days.

When we arrived in Achyk-Suu, the villagers greeted us curiously. This area is rarely visited by tourists and strangers. It is interesting to see the daily routine in such a village. The people live very simply, the houses are functional and there are children and young people hanging around outside. Between the houses there are many fields. Some men and women work there. I did not notice any stores or social facilities. There was a small mosque and a small truck with food in the street. Later I found out that the truck comes here at regular intervals and sells fresh goods from Osh. But I suppose the people here are mostly self-sufficient. What I also noticed was that there were only a few people in the village. It was quiet. Where were all the people who were supposed to live in those village dwellings? 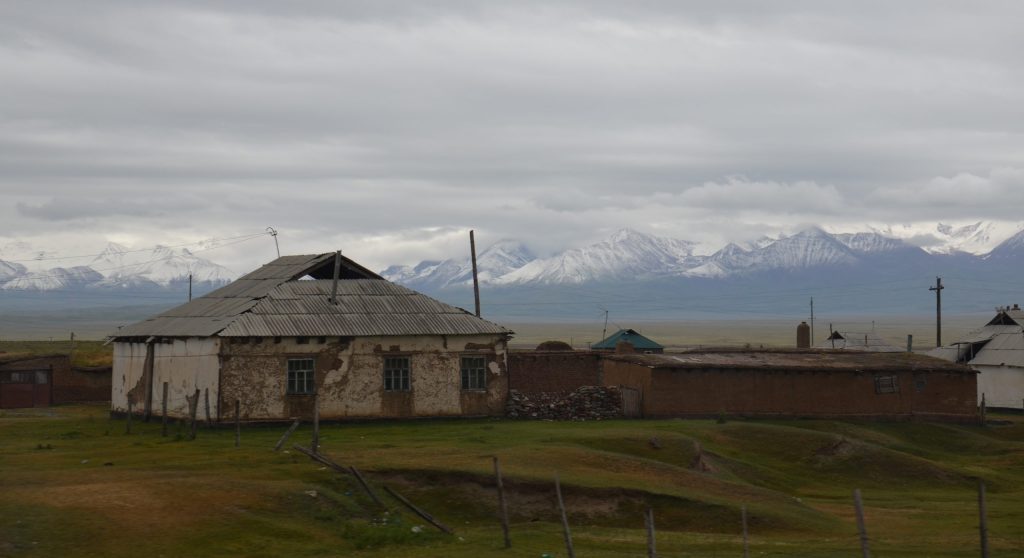 When we drove half an hour over a bad mountain path that turned very steep towards the mountains I got the answer to my question. Let me first mention that after this short ride we arrived in another world. I remember the breathtaking plateau. The meadows there were huge, not to say almost endless. They were crisscrossed by deep ravines that you didn’t recognize until you were standing right in front of them. On the meadows there were dozens of yurts and next to the yurts the horses, sheep and goats were grazing. Children played and rode donkeys and horses. Women wove carpets in front of the yurts and stirred kefir over the blazing fire. In the far distance, at the end of the meadows, mountains towered up more than 5,000 meters into the blue sky. In some places, the giant icy white north faces stretched down to the green meadows. This place was the most beautiful thing I had experienced in my life. Here I felt peace, calm, distance, happiness, relaxation and so much more. A true paradise. Just to experience this place the whole trip was already worth. 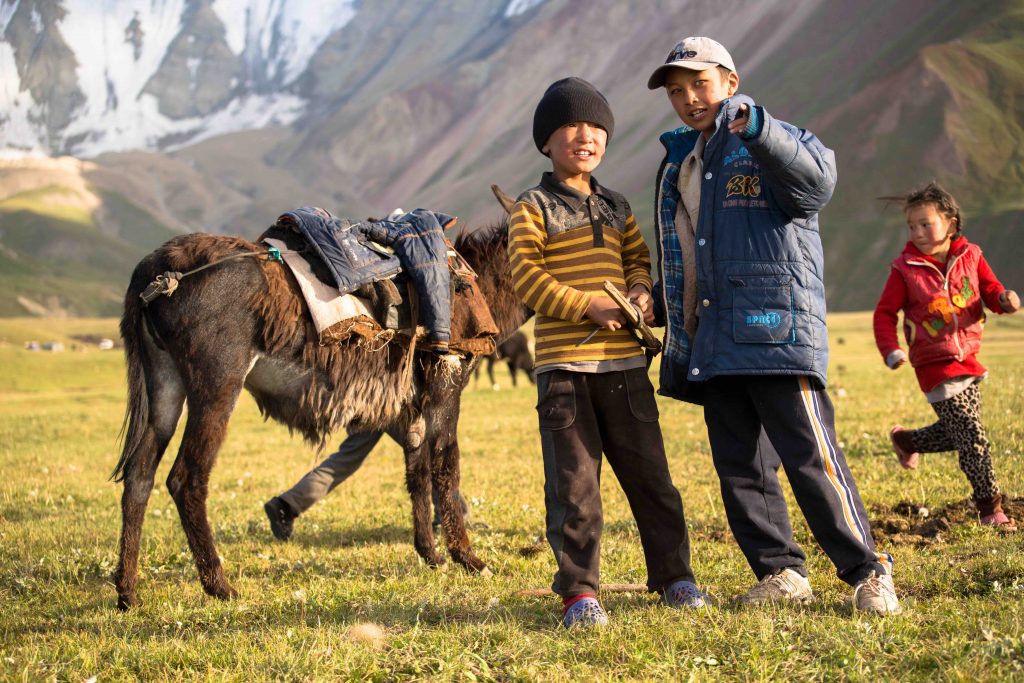 I have spent many days, if not weeks, in that place. I have met some locals there, helped with their animals, stirred kefir, milked horses, been introduced to the art of rug weaving, gazed the mountains for hours, watched the children play, enjoyed many traditional meals in the yurts with different families, rode donkeys and horses and learned about life there. Believe me, that place must be visited and experienced before that part of the world will be also changed by the modern world.

In the surrounding area there are countless opportunities to acclimatize. You can climb the mountain slopes, hike to the smaller peaks, explore the foothills of the nearby glaciers and so much more. You won’t get bored here and if you do, you can enjoy this boredom quite well. After staying at that place two more camps followed before we got to the summit of Pik Leipzig. The second camp is situated at the foot of the mountain. The way up there is long, but also impressive. It leads through a large valley along the huge moraines. At the end you find yourself in a kind of arena. Giant mountain walls border the end of the valley. The huge north wall in front of you seems almost frightening. All day long, rock and ice avalanches tumble down here, sending a loud rumble through the valley. The camp can be safely set up there on a moraine hill. 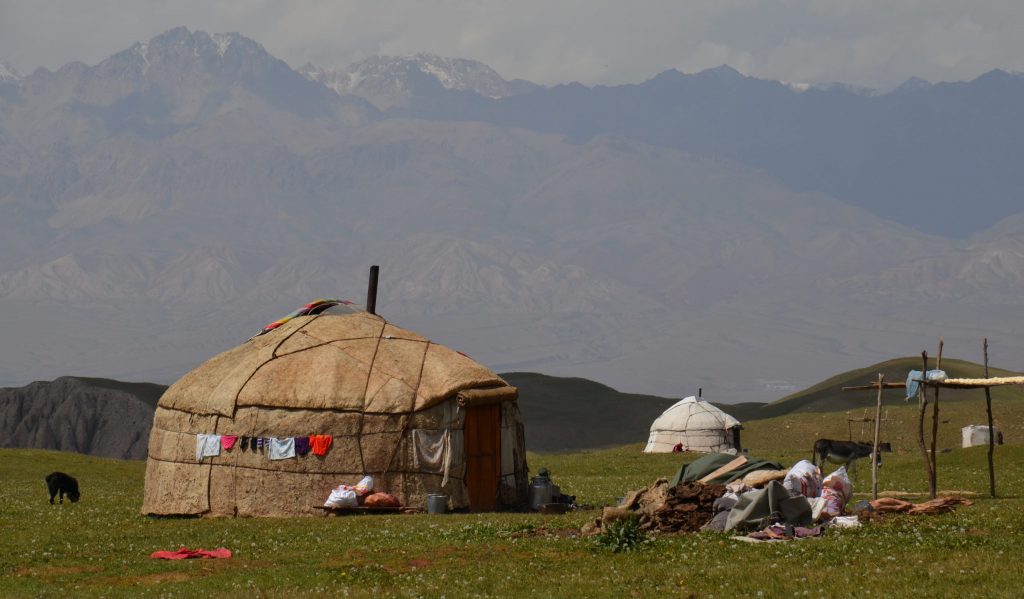 In that camp the stay is impressive but not as pleasant as in the next and the last camps. This is due to the fact that the camp is surrounded by the huge walls. The sun rises late and sets early. It is cold and uncomfortable. But it’s an expedition, not a relaxing vacation. You quickly realize that here. Even the sight of the ascent to the last camp is not for the faint-hearted. A steep and icy mountain gully. Shallow enough to be able to move without climbing, but steep enough that a slip would have fatal consequences. And the gully is 800 meters high. You have to be fast there. As soon as the sun shines into the gully, it becomes dangerous. Stones come loose from the ice. And I have seen stones come down here that were as big as a modern refrigerator. One hit and you’re immediately in paradise. But for those who are experienced climbers, who are familiar with the dangers in the high mountains, who know how to assess themselves and who are well trained…for them the passage of the gully is a nice challenge. And at the end of the gully you will be richly rewarded for all the effort.

After the gully you reach a huge glacier plateau at about 5000 meters. The view of the surrounding mountains is magnificent. You can look across to Peak Lenin and even see the ascent tracks over there. On the plateau we’d set up our camp. From here it was still 700 meters of altitude to the summit. The way is n’t technically difficult but not without dangers. Numerous crevasses run through the glacier to the summit. You have to stay alert at every step. We were lucky though: the conditions were good. But we also noticed that with every hour an initially sunny day got worse. And suddenly we got into bad weather. We had a white-out. That was scary. You take a step and you don’t know if you’re going up or down, if you’re running in circles or going the wrong way. The nice thing about the mountain is that you’re actually on your own. But that’s exactly what makes it extremely dangerous when you overestimate yourself. There is no one to help you. 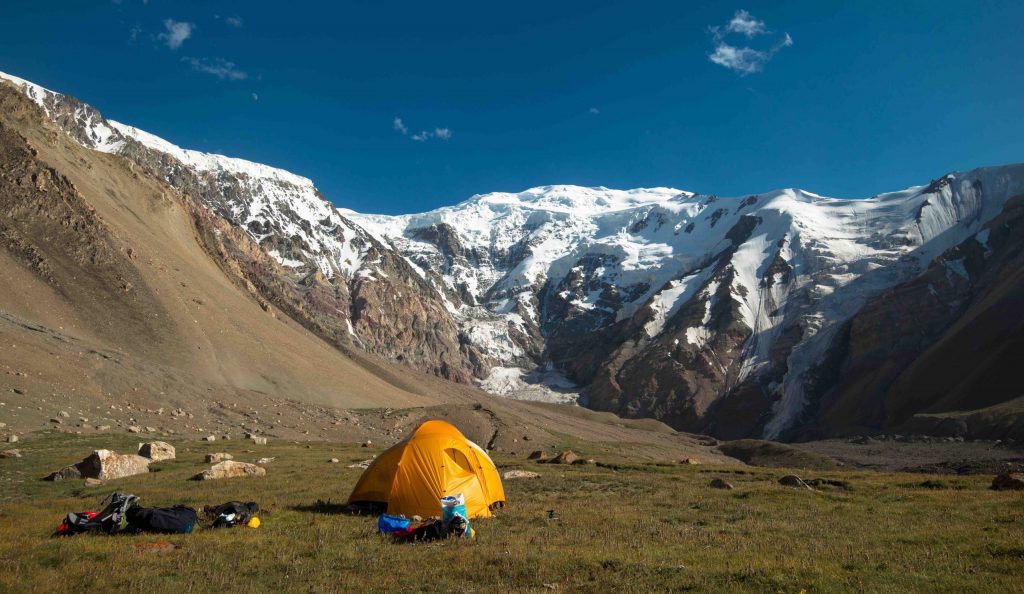 Let me briefly say something about the summit: the view from the top of Pik Leipzig is an unforgettable experience. You can see endless mountains, all the 7000-meter peaks of the former Soviet Union and probably hundreds or thousands of unclimbed summits. We enjoyed this view breaking a short picnic. And we left an iron box with a summit book on the summit. There are many empty pages after our entry. So, now it’s up to you. There is nothing more to say about the summit, you just have to experience it for yourself. But the essence of this trip is simply the whole experience. It is a trip to the rural Kyrgyzstan and the untouched Kyrgyzstan. It is a journey to foreign lands, to friends and to yourself. 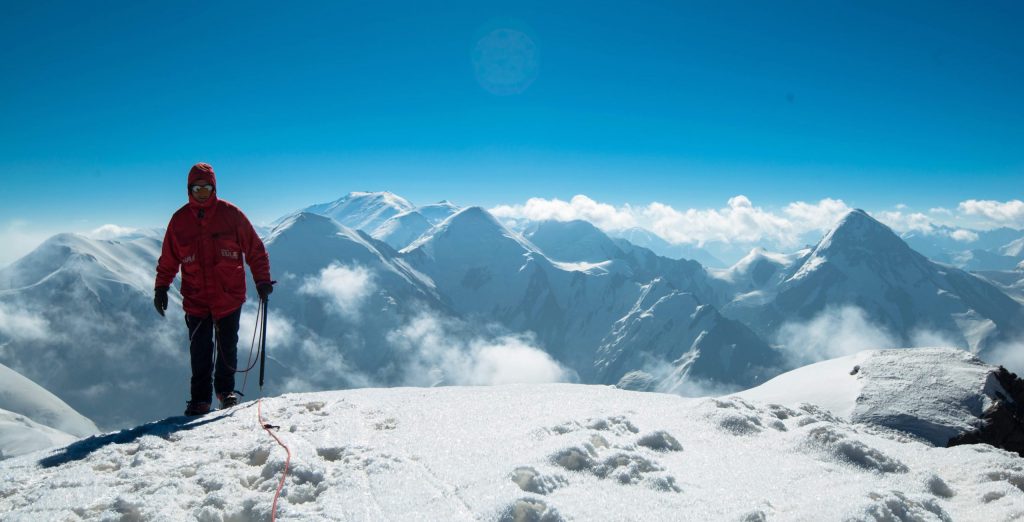